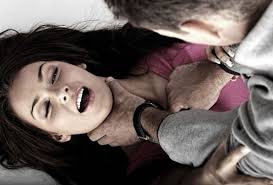 Accordng to RAINN, Intimate Partner Rape is defined as sexual acts committed without a person’s consent and/or against a person’s will when the perpetrator is the individual’s current partner (married or not), previous intimate partner, or co-habitat. This type of rape is usually not considered “real rape” by society.  Most of society has preconceived notions that ‘real rape’ happens by a crazy stranger, violent, in dark, isolated places like parks, woods, etc.  Most of society also thinks that a rape victim must be a virgin of unquestionable character. However, just because a woman has previous consensual sex does not mean that she can not say NO. Many feel that a woman does not have the freedom to cancel her consent. but everyone always have the right to say NO.

There are 3 types of intimate partner rape according to RAINN. These include:

Intimate partner rape survivors usually have repeated incidences of rape compared to stranger rape victims which means that they are more likely to have longer lasting physical and psychological consequences or injuries. Unfortunately, most of society considers wives and girlfriends in intimate relationships to not be rape-able which actually permits more sexual violence to be perpetrated against them.Some are in very violent relationships with battery and torture. Some are in respectful relationships where people would not suspect any coercion or battery. Either way, these rapes occur by men who these victims love or have loved.  It is no wonder that even the victims of intimate partner rape are unable to name it what it is…rape.