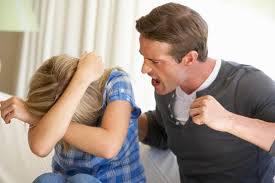 Loving and kind exterior,
hiding the true interior.
Deceiving the innocent women,
but hiding the MONSTER within!
That monster hides silent,
till a trigger turns it violent.
Simple as it seems,
one word can turn it mean.
But no one would know,
for its violent head won’t show,
till it’s victim is alone,
then the true monster is shown.
But who would believe,
when most are deceived?
For the monster goes back to hide,
hiding the violent part inside.
Only the angry words remain,
making his victim feel insane.
Fearing the day he looses control,
and shows that monster in his soul.
And that day becomes more frequent,
as he can’t keep hiding his secret.
But only his victim knows,
for behind closed doors it shows.
So whether stranger or marital rape,
its still a terrifying fate.
Experiencing abuse again and again,
for that monster resides within.

Many people do not understand how victims become trapped in these abusive situations. I can tell you that the verbal and emotional abuse is so subtle at first that victims do not realize   that they are getting conditioned to accept the later abuses. If these abusive and violent tendencies showed up earlier in the relationship, most victims would be breaking off the relationship. It is only after they are deep in the relationship that “The Monster Within” truly shows it’s violent head. Many do not believe in marital rape, but it is very damaging to its victims because they have trusted these spouses who suddenly become violent. All of these abuses escalate as the abuser gets more frequent in his  violence as the cycle of abuse continues from honeymoon phase to tension building phase and then acute battering phase again. These victims get trapped in this cycle when the monster within apologizes and goes back into hiding.

16 thoughts on “The Monster Within…”